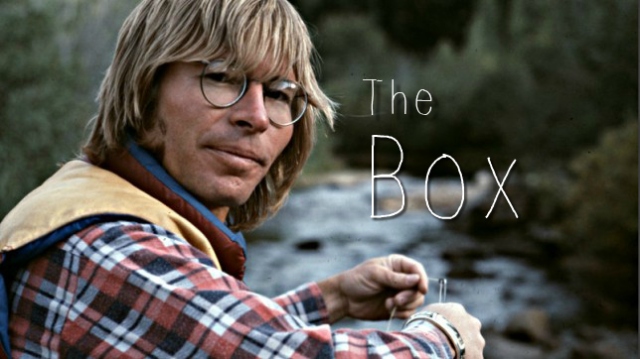 I have a memory of myself from when I was young, maybe eight or ten, sneakily (probably not so sneakily) playing my dad’s vinyl records on our old record player.

I especially loved John Denver’s album Poems, Prayers, and Promises. I remember lifting the needle to repeat one song (poem, really) in particular — The Box.

This poem might be the hippiest anti-war poem in existence — and I loved it. It made me feel all the feelings. I’d follow it up with Tom Paxton’s Jimmy Newman and My Son John and my little ten-year-old self would be lost in heaving sobs. (That’s normal, right?)

If you’ve never read the poem (you probably haven’t) it’s about a box “bound up with chains and locked with locks and labeled “Kindly do not touch; it’s war.”

I don’t think it’s a plot spoiler to tell you that the box is opened and war comes out and it’s terrible for everyone, everywhere. But the poem ends with a hopeful note — all it takes to put the bouncing ball of war back in the box is wisdom. (I told you it was the hippiest poem ever.)

This poem came to my mind today, not in the context of war, though there is enough of that in the world right now.

It came to mind because over the last few months I have seen story after story about people associated with the KKK or the American Nazi party (or just your random unaffiliated white supremacist) openly and excitedly expressing their belief that a Donald Trump presidency will bring their views back into the mainstream.

I know these beliefs, and the hatred they contain, were never really shut up in any box. They’ve always been there hiding under the rug, and they will never be totally swept away. But until now, they were at least to some degree restrained. Not anymore – Donald Trump has not only welcomed these beliefs, but inflamed them.

I want Hillary to win this election for so many reasons. Above all I want her to win for this reason: because we can’t allow anyone to believe that there is a place in America for hatred — whether it’s of people whose skin is darker than ours, or whose religion is different from ours, or whose poverty or fear have driven them to our borders in desperation.

Because you know you want to read it…

Once upon a time, in the land of Hush-A-Bye, around about the wondrous days of yore, they came across a kind of box, bound up with chains and locked with locks and labeled “Kindly do not touch; it’s war.”

A decree was issued round about, and all with a flourish and a shout and a gaily-colored mascot tripping lightly on before. Don’t fiddle with this deadly box, or break the chains, or pick the locks. And please don’t ever play about with war.

The children understood. Children happen to be good and they were just as good around the time of yore. They didn’t try to pick the locks or break into that deadly box. They never tried to play about with war. Mommies didn’t either; sisters, aunts, grannies neither. They were quiet, and sweet, and pretty in those wondrous days of yore. Well, very much the same as now, not the ones to blame somehow for opening up that deadly box of war.

But someone did. Someone battered in the lid and spilled the insides out across the floor. A kind of bouncy, bumpy ball made up of guns and flags and all the tears, and horror, and death that comes with war. It bounced right out and went bashing all about, bumping into everything in store. And what was sad and most unfair was that it didn’t really seem to care much who it bumped, or why, or what, or for.

It bumped the children mainly. And I’ll tell you this quite plainly, it bumps them every day and more, and more, and leaves them dead, and burned, and dying, thousands of them sick and crying. Cause when it bumps, it’s really very sore.

Now there’s a way to stop the ball. It isn’t difficult at all. All it takes is wisdom, and I’m absolutely sure that we can get it back into the box, and bind the chains, and lock the locks. But no one seems to want to save the children anymore.

Well, that’s the way it all appears, cause it’s been bouncing round for years and years. In spite of all the wisdom ‘wiz since those wondrous days of yore and the time they came across the box, bound up with chains and locked with locks, and labeled “Kindly do not touch; it’s war.”

One thought on “The Box”