Last week, I had one of those experiences that all parents dread. I was sitting in the radiology room at an urgent care center holding my hacking, wheezing little girl in my arms, waiting for the technician to rig up the x-ray machine so my very petite child could reach it.

Our entrance to the clinic had been theatrical — I came in running, my daughter clinging to my neck and hips, as thunder boomed and shards of lightening sliced the horizon behind us. A massive storm was breaking.

When the x-rays were finally completed, they confirmed the doctor’s suspicion: my daughter had bronchitis and early stage pneumonia. It was our second day of vacation and things weren’t going quite as we had planned.

The following day, I was walking up and down the boardwalk leading to the beach with my two-year-old. She was naked but for a swim diaper because, for some reason, her swimsuit was oddly alluring to bees. In the span of just a few minutes, two bees had attached themselves to the fabric and settled in, almost as if drawn there by a force beyond their control. She panicked, so I yanked the suit to the ground and tossed it several feet away. The bees fled, but there was no way my baby was getting back in that suit without a fight. She revels in her nudity. 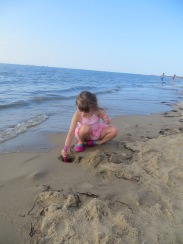 Making the best of things

My five-year-old was wheezily building sandcastles because, despite her terrible cough, she was determined to fulfill all of her vacation plans. The little one — whom we had thought to be fearless — was terrified by the waves. So up and down the boardwalk we strolled, scuffing through the sand and noticing the little things, like bottle caps in sand dunes.I found myself thinking, with a laugh, “Well, in a few years, this will be ‘the vacation when Michele had pneumonia, and Norah was a Siren for bees, and I spent much of my time looking through the cracks of a boardwalk.'”

We did lots of other things — we saw dolphins swimming, we hiked in one of the most beautiful state parks on the East Coast, and, most importantly, we spent lots of time with my sister-in-law and her family, who live too far away for us to visit regularly. But those unexpected incidents were foremost in my mind. 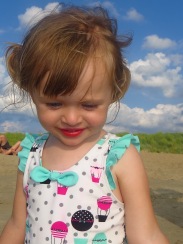 So much of life is in the telling — sharing our stories about the events that shape us. The good times are priceless in their own way; they bring us joy as they occur. But the challenging times, the unexpected incidents — the rainstorms, the lost luggage, the massively bad days — they make us reflect. They take us outside of ourselves and, in reliving those experiences, they open us up to a greater appreciation of the humor we can find in our own foibles and moments of distress.

We really are “all just stories in the end.*” It’s how we interpret those stories and how we share them with others that make them great.

*I’m only a budding Whovian, since I have just now started to watch the show, but I’d like to thank my friend Amanda at Bluestocking Rambles whose Facebook posts got me interested. My dad, too, since I remember the show from my childhood because of him.