I have been away for the last couple of weeks, but I have a really good reason: My husband and I decided to get new carpet in our basement.

In all fairness, it was a logical sequence of events. Replacing the basement carpet became a necessity when we realized that the stains I had begun to think of as poltergeist footprints because no amount of carpet spray or steam cleaning could remove them  were actually from mold.

Our one-room basement is where our kids play, and since most of their play involves rolling around on the floor, we thought it probably wasn’t the best thing for their health if they were rubbing their faces in a moldy carpet. So it had to go.

This is where things started to snowball. Our old carpets were a lovely shade of ivory. When the single gentleman with one indoor cat who previously owned our house sold it to us, they were pristine. They were beautiful.

However, the seven years of our ownership have not treated those carpets well. We live in the woods. We have two small, messy children. We have a dog who likes to eat grass and then come inside and vomit it up. I have burned hundreds of thousands of calories over the years scrubbing and steam-cleaning all of the inevitable stains, but the dirt was decisively winning the battle.

And since we would be getting new carpets, what better time to repair all the damage to our walls from the installation and abuse of baby gates? And since our old reclining sofa and loveseat had left black marks on our carpet, we had to replace those as well, right?

And so on, until I had devoted myself to the cause of re-carpeting, repainting, and refurnishing significant portions of our home.  With a two year old. While also working on two freelance projects. WITH A TWO-YEAR-OLD. After which, I planned a Halloween party with 10 kids 5 and under. I never said I was bright.

By the end of the installation, on a Tuesday evening at approximately 5:20, our house looked like this:

Quoth the husband, without irony: “Yeah, it shouldn’t take long at all to get the house back in order.”

And yes, the furniture that was supposed to arrive between 2-6 pm, but which has not arrived as of 5:18, will be coming in boxes and without slipcovers a la Ikea. Totally wasn’t a problem… 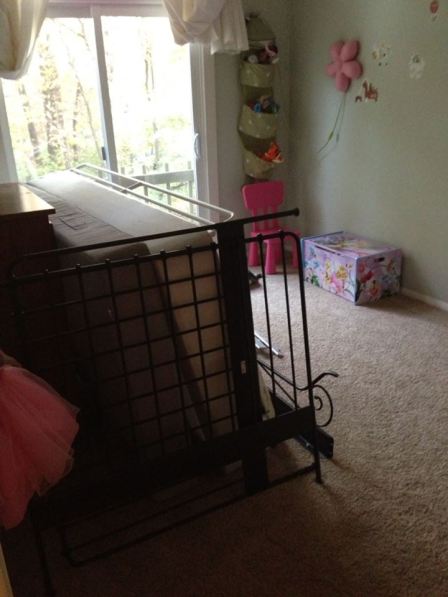 Why yes, that is the dismantled bed of our five-year-old. Why would it be a problem that it still wasn’t put together by her bedtime?

But now everything is back to normal. And having accomplished this massive project mostly on my own, I feel pretty good about myself. In fact, I think I now understand why so many men enjoy home improvement projects so much: It makes you feel powerful and skillful and gives you a sense of having snagged a corner of the American dream.

Now I’m going to go sit on the couch and watch some pay-per-view wrestling with a beer in one hand and the other stuck in the top of my pants. Just kidding. I’m going to eat some chocolate and read a nice cozy mystery. And then maybe I will lay down on my brand new, brown, stain-hiding carpet, and pretend I’m at the beach.

One thought on “Baby, I’m Back”