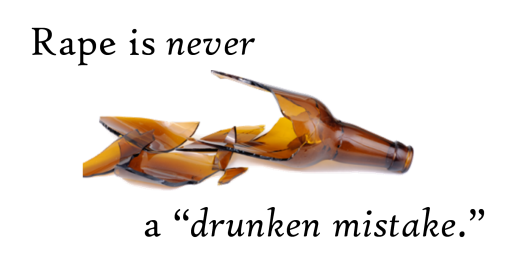 It’s been a long, not-so-great day. I have a sick kid, an ailing, elderly dog, a leaky roof and my husband is out of town. But I am reading about this Brock Turner DB and I can’t not say something about what I’m seeing.

It’s not that I have any new insights. I’m mad about all the same things everyone else is mad about. My thoughts just keep returning to one infuriating, mind boggling fact: that there are people out there who are able to equate the sexual assault of an unconscious woman behind a dumpster with “stupid shit we do when we’re drunk.”

After admitting that he was “the sole proprietor of what happened on the night that changed these people’s lives forever,” he goes on to say that “I made a mistake, I drank too much, and my decisions hurt someone.”

There are countless occasions in which alcohol and other external factors lead people to make bad, hurtful, illegal, and even lethal decisions. A drunk driver who causes a fatal accident makes a bad decision that takes a life and destroys many others. He is and should be held accountable for his decisions and their consequences — but he is not fundamentally a murderer.

Assaulting an unconscious woman behind a dumpster falls in a different category. It’s not a bar fight or a drunken lovers’ quarrel. It’s not a mistake. There is a degree of moral agency in the commission of that act that cannot be mitigated.

The next thing I remember I was in a gurney in a hallway. I had dried blood and bandages on the backs of my hands and elbow. I thought maybe I had fallen and was in an admin office on campus. I was very calm and wondering where my sister was. A deputy explained I had been assaulted…On that morning, all that I was told was that I had been found behind a dumpster, potentially penetrated by a stranger, and that I should get retested for HIV because results don’t always show up immediately. But for now, I should go home and get back to my normal life.

One day, I was at work, scrolling through the news on my phone, and came across an article. In it, I read and learned for the first time about how I was found unconscious, with my hair disheveled, long necklace wrapped around my neck, bra pulled out of my dress, dress pulled off over my shoulders and pulled up above my waist, that I was butt naked all the way down to my boots, legs spread apart, and had been penetrated by a foreign object by someone I did not recognize. This was how I learned what happened to me, sitting at my desk reading the news at work.

A person who, under the influence of alcohol, selects a victim, violently assaults her, and leaves her unconscious, alone, by a freaking dumpster is not someone who made a mistake. He is a predator. Period.

An Independent Non-Discriminatory Platform With No Religious, Political, Financial, or Social Affiliations

I write because my heart has a lot to share from all that flows from my soul and the pain and struggles I have experienced. I write from a place of love.