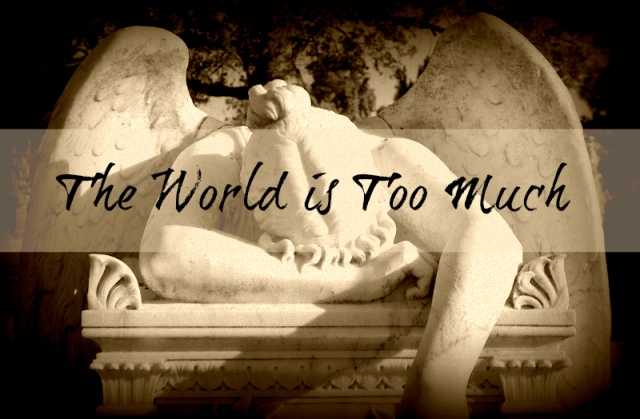 I began writing this post with this sentence: “whenever our society experiences an incident of extreme violence or injustice or an epic failure of leadership, I find myself feeling overwhelmed; my thoughts scramble and collide; eventually they collapse.”

I deleted it, then I rewrote it, and then I decided to reframe it. What I wrote about myself is true, but the context is  inaccurate– it implies that the violence and injustice and incompetence I’m describing are aberrations, that they come in short-lived bursts, bookended by a beginning and an end.

What we are experiencing now – the near-constant gun massacres, the violent mob mentality rooted in hate and fueled by rhetoric, the rapes that go unpunished, the racism that goes unchecked, the total failure of our leaders to lead, the feeling of impending crisis – these are not “incidents.” They are our norm.

And the fact that this turmoil is a defining characteristic of the age in which we live only serves to intensify the chaos of my thoughts and feelings. My anger and frustration and grief and despair and fear struggle for pride of place until my mind becomes exhausted and defeated; stymied by its own excess of activity.

So as much as I wish I could come up with something balanced and meaningful, or at least coherent, to say about Orlando, or gun access reform, or racism, or Republicans, or the fact that Donald Trump’s face keeps popping up in my nightmares, I can’t.

I just can’t. The world is too much.

All I can do is grasp onto the tiny moments, and listen to the whispers of what is good in our lives.

Like a conversation with my five-year-old, in which she told me that she was BORN to make people laugh, and the pride I feel in knowing that she believes her mission in life is to bring others joy.

Or the “I love you more” argument I have every night with my 8-year-old, and the powerful gratitude —  the sense of awe — I feel that despite my mistakes and imperfections as a parent my daughter loves me as fiercely as I love her.

These moments aren’t much. They come in short-lived bursts, bookended by a beginning and an end. But they are everything. They have to be.