The idea for the “Friday Roundup” came to me when I was driving around town today. I was thinking about a bunch of different posts I wanted to write and about how I really need to do something regular on the blog. So, I give you this — a roundup of some of the thoughts that have been floating around my brain this week. Maybe I will stick with it? Maybe I won’t? I’m not quite sure yet. That just adds to the excitement, right?

Mostly, I wanted to post about a few things that are really getting my Irish up. (Or my Polish? Or my Italian? Or my “whatever I am,” which I don’t really know because I’m adopted?) In other words, I’m angry. And having been raised in a family of feisty, ethnic Irish/Polish/Italian Catholics, angry usually results in hyperbolic ranting.

Our country has had a lot to say about our governing bodies and political parties this week. A lot of what I have read has had me standing in my kitchen compulsively shoving balls of gluten-free Rice Krispie treats into my mouth to keep me from developing a permanent eye-twitch. (Yes, I was reading comments. Bad idea. Always.)

I’m not going to repeat what other people have already said. Some of it has been inspiring; the rest of it is infuriating. What I am going to say is this: I am mad at Congress. I am mad at individual Congress people, and I am mad at Congress as a whole. I am mad for a lot of reasons, but mostly I am mad because they don’t seem to have any real connection to the people to whom they are supposed to belong or any real understanding of what their role is in running this nation.

It’s like two parents who are bickering about their kids. On the surface, the fight is about the good of their children and their family. And to some extent, each parent is motivated by a genuine desire to seek what is best for his or her children. But what is really fueling the flames is each parent’s ego. Yes, they are both concerned about their children. But ultimately, they have each become so attached to their own idea of what should be done that the argument has become about THEM — their ideas, their self-worth, their desperate need to be right.

But here’s the thing. What is best for the children and for the family is that the parents get the hell along. Their most important  job is to keep their family together. Those other little things, the stuff of arguments, are never, ever, more important than the cohesiveness of the family as a whole.

I know that the fate of a nation is bigger than the fate of a family. I know that the implications of a healthcare initiative and the budget that funds a superpower are mountainous in comparison to deciding whether or not Jonnie Jr. is allowed to join the swim team or not.

I also know that a nation falling apart is mountainous in comparison to a family falling apart. And it is both maddening and devastating that the petty bickering that rips marriages apart and breaks up families has become the modus operandi of the houses of our government.

Now back to those Internet comments I mentioned earlier. I live about 30 miles away from Washington DC. This means that a LOT of my friends and family work for the federal government. Most of them are now furloughed because of a congressional standoff, which means that people I know and care about will not be getting a paycheck for an unspecified period of time. Some of these people are living in another country, where they are representing the same government that currently isn’t paying them.

These are all people who have to do things like pay their mortgages and buy gas, and provide their children with food and clothes and shoes and stuff. This whole shutting down of their place of employment — it sucks. It’s scary and depressing and infuriating.

But then there are the internet trolls who feel the need to add insult to injury and denigrate these very people who help run our country. I won’t bring their nastiness into this post. Instead, I will use it to say how very proud I am to know so many people who work for the good of our country, and what an honor it is that there was a time when I was one of them.

Every single person I know personally who works for the government is intelligent and hard-working. More importantly, all of them — from my 22-year-old cousin who just got his first post-college job to my 50-something attorney aunt who has dedicated more than 20 years of her career to our country — are working for the government because they care about this country.

So to all of these people, I would like to say THANK YOU. I appreciate the work you do. I’m sorry for what you are going through right now and I pray that it will be over soon.

Finally, earlier this week my daughter said something that broke my heart and got me thinking. I started a post about it, but realized that I need to do a little more thinking before I can do the topic justice. In the meantime, I am sharing this picture of a beautiful, brown-eyed girl who is so much more than she realizes. It will come up again. 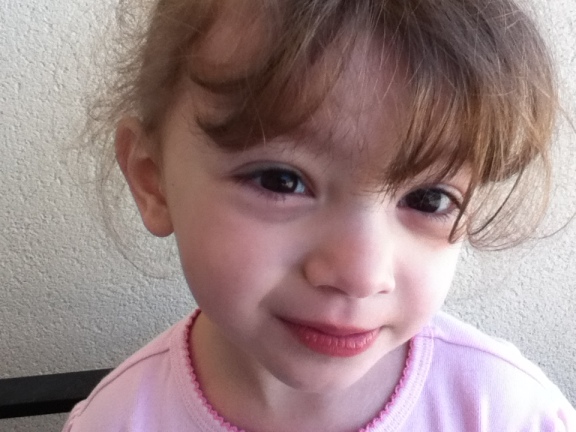